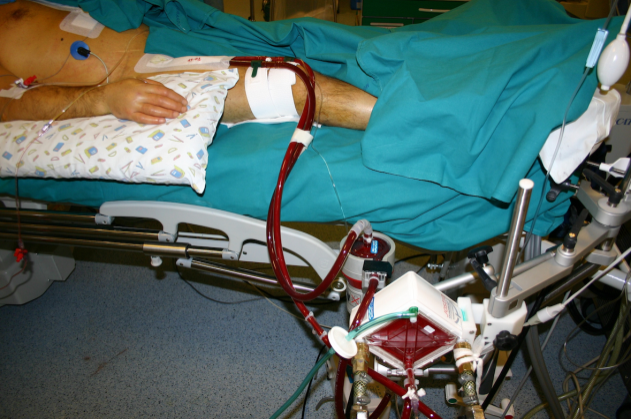 While working on a review article recently I was forced to dive deeper into the murky waters of extra-corporeal membrane oxygenation (ECMO) [ Click here for an ECMO introduction ].  ECMO has classically been used in the pediatric ICU setting for severe pulmonary and cardiac disease, essentially taking those bodily systems out of the picture and allowing time to heal or time for intervention.  In the past decade we have seen increased use in the adult populations, specifically in the Emergency Department and even the pre-hospital setting.

While the literature on the use of ECMO specifically for refractory cardiac arrest following drowning is lacking, this month two articles were published in the literature which warrant review.


While this study doesn't reveal anything too ground-breaking, it does show the feasibility of such a treatment in the initial resuscitation and within the first 6 hours of treatment in those patients who begin to develop ARDS.  Would have liked to see a multi-variate analysis and the data in the paper was very hard to decipher and determine which patients died to compare initial findings.

Overall, this study showed a fairly poor outcome.  With the rhythm on arrival to hospital being asystole in all patients, the chances of survival were poor from the start.  It is unfortunate to see that even the ones with an initial shockable rhythm ended up in asystole, may reveal room for improvement in the EMS treatment.  Some other issues were a high rate of suicide, which may have been associated with ingestions (no autopsy data available).  The authors did attempt to provide some predictive factors, but they are essentially based on a single patient.

What I like about this paper is the detail they give on the standardized system which is in place for initial resuscitation and transport of drowning patients.  You can tell this is a disease that is taken very seriously.  They even have a system in place for prophylactic antibiotics specific to drowning; while the current data has not shown benefit to tis initial treatment, theirs is at least based on the known flora of the Seine and the protocol includes initial tracheal aspirates on these patients.  I also like the discussion section which provides a nice review of the other pertinent literature on this topic.

To date, most of the "promising" literature for the use of ECMO with drowning cardiac arrest is in single patients case studies.  Larger studies have not shown benefit, but also not shown harm.  Most of these studies are doomed from the beginning due to the already poor outcome of this patient population, but I like that is shows that these systems connecting EMS, ED, and ICU with one common goal are possible.  In the right patient population, ECMO will likely benefit, especially when used to bridge patients with good prognostic indicators through clinical deterioration like ARDS.

Definitely a lot of work to be done.