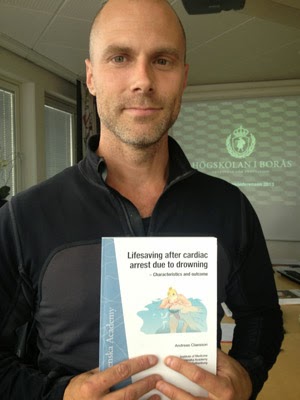 The past 20 years have seen a shift in the treatment of drowning victims, primarily through a tighter focus on ventilations in the treatment algorithm.  Other factors like improved and more widespread EMS systems, public CPR campaigns, and improvements in ICU care have also occurred during this time, but there isn't a large amount of evidence to tell us what impact this is all having on survival and neurological outcome.

Andreas Claesson, who has already provided a wealth of information to the drowning community, leads this investigation which looked specifically at the Swedish OHCA (Out of hospital cardiac arrest) database over a 20 year period.  His team compared different time frames over this 20 year period to see if there were any differences in patient demographics, EMS times, and survival.  This is a very limited study given its small size and limited geographic scale, but definitely a nice model for other agencies who want to investigate trends in drowning survival in their regions.

Compared to the US, the rates of bystander CPR were impressively high (74% during 2006-2012 period).  Despite this, there was still an overall disappointing rate of survival to one month.  This can be for many factors, including the initial injury just being too severe for recovery, but what needs continued investigation is whether the proper bystander treatments are being administered.  Bystander CPR is a great thing, but its use for drowning injury is very different than for cardiac disease since the patients with drowning injury need ventilations in addition to chest compressions.  This is especially important given the trend, in this study, towards increased EMS arrival time.

Reference:
Claesson A, Lindqvist J, Herlitz J. Cardiac arrest due to drowning - Changes over time and factors of importance for survival. Resuscitation. 2014 Feb 19 (ePub).
Posted by Andrew Schmidt, DO, MPH at 11:29 AM